[This article was written with Eng. Sarit Unger-Massiah]

We all remember the queen (or king) of the class, but only a few know the connection between her and the quality of learning. This article will focus on that.

Every human group develops through power struggles, which emerges natural leadership with hierarchical status. We define "power" as the ability of someone to force the others to do His desire, even if it is against their will and interests. Accumulating power in a classroom is a natural process, in which the dominant student uses different relative advantages such as: attractive appearance, charisma, athletic abilities, academic achievement and socioeconomic status, social skills, emotional intelligence, etc.

Power distribution in a group is detectable and measurable using Organizational Network Analysis - ONA. We measure organizational dominance (by connecting seven different measures of strength). Dominance is a feature offered sparingly. Only a few people in each group will be dominant. In the example below, the two dominant students are in class dominance Queens. 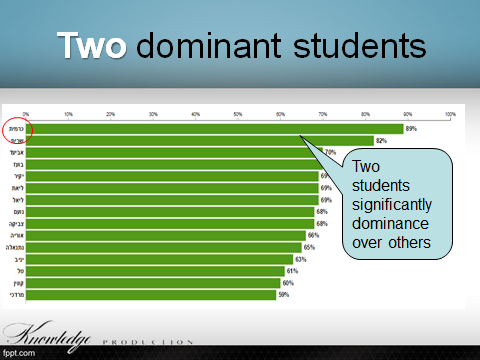 You can see dominant student at the top of the chart: 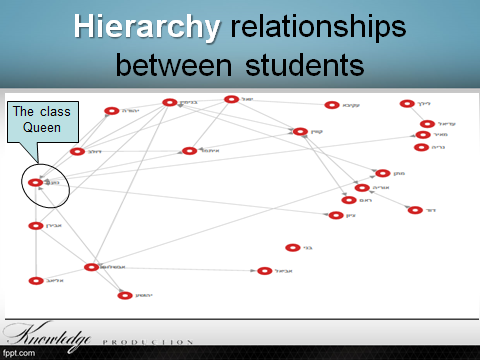 Can we find a queen / a king in every classroom? Networks center on. This is one of the networks' features. It is a self-organization process of concentration of power into the hands of a few. However, we can find classes - at the beginning of the process of organization - where the power struggle is underway, and where the queen has not yet been formed. Therefore, until the situation stabilizes, the social atmosphere is chaotic.

Friends are the main factor affecting the student's willingness to learn (Sherman et al., 2002; Wilkinson, and Kraljevic, 2004). Power struggles between classroom cliques, make it very difficult for the teacher to achieve a productive learning atmosphere. Network diagram below outlines a classroom, which a natural hierarchy has not been formed yet. There is power struggle between different students, posing as having relationships with many others. 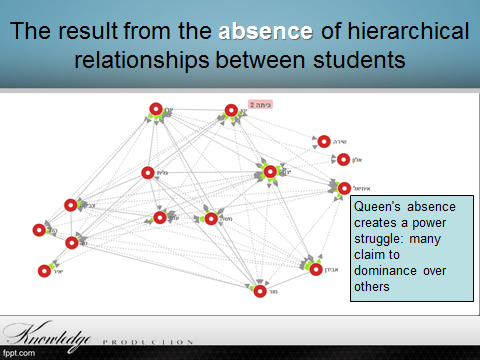 Here, we have identified a new pattern - an informal role of 'class queen: She stabilizes a social order, relaxing the power struggles. This order is essential for learning. Therefore, the very existing of a queen enables a better learning classroom atmosphere.