[This is a free picture, uploaded to flickr by Rexness]

Eng. Sarit Unger-Massiah is a partner in "knowledge production".

One of the great advantages of Organizational Network Analysis (ONA) is the ability to detect repetitive patterns within organizations. If we found such a pattern, we can assume that it will also be found in other similar organizations.

This advantage allows us to examine the issue of female power in Western countries organizations (unfortunately, we do not have ONA from eastern countries). Moreover, Since educational institutions also use ONA, we can observe, "the game of power", as well as the differences between the sexes' features, from kindergarten through adult organizations.

Let's start with the patterns detected in the vast majority of more than a hundred cases, sampled in Israel, Europe and the United States: In all ages, women are collaborating more than men, both among themselves and with the opposite sex: 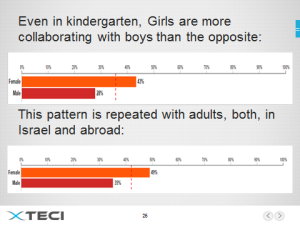 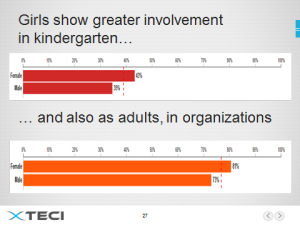 But when it comes to power, the picture is reversed: In kindergarten (age 3-4) boys are twice powerful than girls!

In western families, women are usually more powerful than men, but in organizations, it is quite different: The gender, which has the majority in management, is the most powerful in the organization. For example, we found that women are more powerful (albeit narrowly), in high-tech manufacturing plants, both in Israel and abroad: 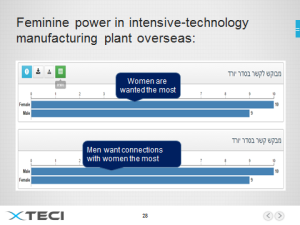 In contrast, for example, in a retail enterprise with a majority of men in its management, there is a significant male power: 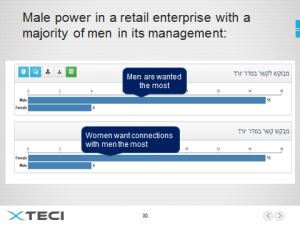 The findings - regarding women cooperation and collaboration - reinforce the gender literature on women communication and cooperation. When ONA interfaces a problematic managers' cooperation, strengthening women's empowerment is a sure medicine, and a method to increase organizational effectiveness.

The boys' dominance in kindergartens marks the place where the struggle, for a significant female presence organizations' managements, should start. ONA allows a periodic test, backed by numerical indices, of the efforts made to change this behavior.